Music For Solo Voice And Organ At St. Josaphat 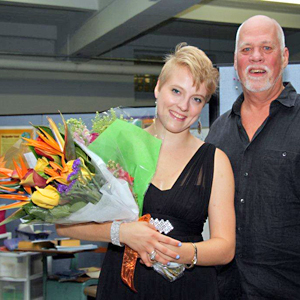 St. Josaphat’s Church of Bayside hosted the sixth concert in its Performing Artists Concert Series and the last performance of the 2011- 2012 season. The music included compositions for voice and organ and featured a young and talented mezzo-soprano, Julia Partyka and an excellent organist, Gerald Anders.

Julia Partyka is a student at the New England Conservatory of Music. A 2009 graduate of the LaGuardia High School of Music and Art & the Performing Arts in NYC, she was frequently featured as a singer with the opera workshop, the orchestra, the gospel choir, and musical theatre productions. During the summer of 2010, Julia was invited to the American Institute of Musical Studies in Graz, Austria, one of the leading training programs for professional singers. Julia has also sung in Italy at the Festival of Music and Art in Tolentino and additionally is a skilled pianist, actor, and highly trained dancer.

Gerald Anders just completed his 12th year as Organist – Choir Director at the Community Church of Douglaston where he built a highly regarded semi-professional choir and oversaw the installation of a large performing organ. He is a member of the performing and teaching faculty of the Festival di Musica ed Arte which takes place in the summers in Tolentino, Italy. Formerly the conductor of the Bayside Men’s Glee Club, he has performed as pianist for many singers and instrumentalists as well as a choral and orchestral conductor in the United States and Europe. As Artistic Director of the professional chamber music concert series – Douglaston Concerts – for ten years, he brought internationally recognized performers to the North East Queens area.

Artists performed together fragments of Pergolesi’s Stabat Mater and the Ave Maria settings by four different composers: Vavilov known under the pseudonym Caccini, Schubert, Verdi and Gounod. Additionally Anders played the solo organ works by French composer Guilmant. The audience has prepared artists a standing ovation. At the end of the concert Julia invited everyone to sing Amazing Grace.

The concert was sponsored by St. Josaphat Jobo Fund, represented by sisters, Arleen and Barbara Jobo. Organ was prepared and tuned by Elsener Organ Works of Deer Park, NY,

Beginning of the next series of concerts is planned in November.