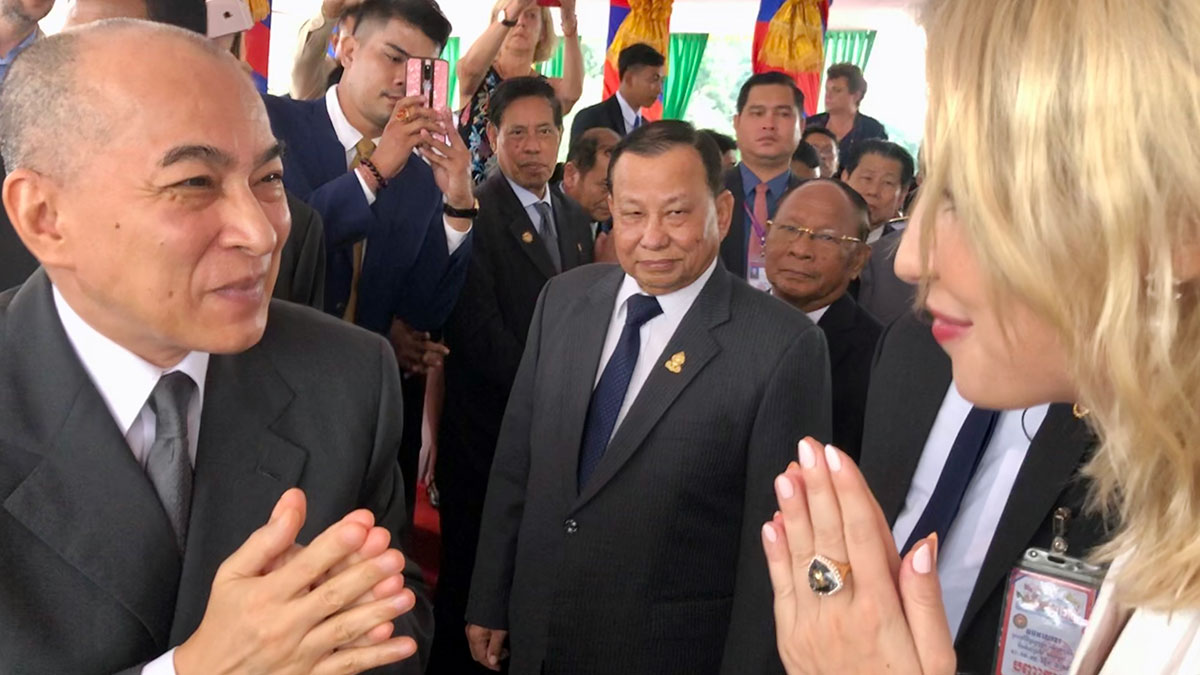 Peace Ambassador Princess Angelika Jarosławska Sapieha mobilizes the international community to support Cambodia in demining action and raise awareness about the “underground devil”. She has a support of international organisations, such as Theopolis Foundation.

Millions of mines are scattered in 70 countries in Africa, Asia, Europe, the Middle East and the Americas.
This is the content the statement:

Peace Ambassador Princess Angelika Jarosławska Sapieha, did me the honor to invite me to a meeting with Sister Denise, the 1997 Australian Nobel Peace Laureate, on November 10, 2019. She is the director of the Jesuit Refugee Service (JRS) in Cambodia and a member of the Cambodian Campaign to Ban Landmines Anti-Personal.
This meeting took place in Siem Reap at Mindol Metta Karuna (a structure under the responsibility of the Jesuit Order in Cambodia).

I. THE 1997 NOBEL PEACE PRIZE
In December 1997, the Nobel Peace Prize was awarded to the international campaign against landmines initiated by sister Denise Coghlan and coordinator Jody Williams.

The choice of the Nobel Committee was motivated by two reasons:

hHe wanted to draw the world's attention to the humanitarian crisis of anti-personnel mines;

He wished to salute the unique cooperation that has developed between governments and civil society to bring humanity to a world without landmines.

It also obliged countries to participate in the urgent tasks of demining and victim assistance. Many personalities, including Lady Diana, have been very active in the International Campaign to Ban Landmines (ICBL). In particular, they stigmatized these devices in the public opinion and did a promotional work to get governments, including that of Gabon, my country, to sign the ban treaty. In the field, they have implemented demining and victim assistance programs.

Every 22 minutes, someone is killed or maimed by these machines straight out of hell.

III. AND NOW ... WHERE ARE WE?
The treaty has been signed but the cleanup of the mines is not finished yet. Hence the engagement of new actors such as Ambassador for Peace Princess Angelika Jaroslawska Sapieha. The goal would be to clean up all mined areas, destroy all stocks and stop the use of anti-personnel mines around the world. For the moment, the Ottawa treaty is an excellent paper treaty.
It has of course been signed by 125 countries. But now, it must be ensured that governments around the world ratify it (incorporate it into their national legislation) and that they apply all the provisions in a coordinated manner. We must encourage non-signatory countries by raising awareness of the humanitarian consequences of these weapons of selective destruction and the opportunity now available to the human community to permanently eliminate them.

IV ANTI-PERSONNEL LAND MINES AND THE HUMANITARIAN CRISIS
The problem of anti-personnel mines is a fundamentally humanitarian problem. These weapons of war kill in peacetime. Destined for soldiers, they kill and wound women and children. It is because they strike indiscriminate human beings that these weapons are now prohibited by international law.
The numbers are alarming ...

Millions of mines are scattered in 70 countries in Africa, Asia, Europe, the Middle East and the Americas. The most affected countries are Afghanistan, Angola, Bosnia and Herzegovina, Cambodia, Croatia, Eritrea, Iraq (Kurdistan), Mozambique, Somalia, Sudan and Viet Nam.

The artificial limb of a growing child should be replaced every six to twelve months and that of an adult every three to five years. At the time of the accident, many victims are alone in isolated locations. According to an ICRC doctor, about half of them die in a few hours. Strategic mining areas can block access to sources of drinking water and cropland and prevent rural vaccination teams from touring. In the past 55 years, anti-personnel mines have killed and injured more than nuclear, biological and chemical weapons combined. According to estimates by the International Committee of the Red Cross, mines kill 800 people a month and mutilate 1,200, or 2,000 victims per month, or nearly 25,000 per year.
According to UNICEF, 5,000 to 6,000 of these victims are children.

V. THE COMMITMENT OF ALL
The Ottawa Treaty is only one of the essential measures to solve the problem of anti-personnel mines. A large number of people continue to live in mined areas under the constant threat of these machines. Most victims still need medical, social and economic assistance and rehabilitation. This must be treated effectively.
And it is here that we must complete this testimony by the words of prayer of Sister Denise Coghlan very precisely:
"Today, we pray especially for a world of peace, a world free to celebrate and dance, a world where there would be no more mines. We pray for families who have lost one of their own because of a mine. Comfort them. We pray for children, women and men who are fighting for a new life. Give them courage. We pray that the hearts of anti-personnel mines manufacturers will change. They put their technical and commercial skills at the service of development and not of war. We pray for the deminers. Help them to fulfill their sacred task in safety and perseverance. We pray for countries that are seriously affected by mines. That their lands are overflowing with rice, corn and food and are no longer ransacked by the mines. We pray for the heads of government. May they ban mines and allocate funds for mine clearance and victim assistance."

Together with the UN Peacekeepers NGOs will provide necessary measures on collections of funds and providing of medical support for rehabilitation of kids - victims of conflicts on the international level. Princess Angelika Jarosławska Sapieha has been recognized as a "World Ambassador for Peace" by the International Peacekeepers Association (SPIA) for Humanitarian Support and Development, a United Nations peacekeeping NGO with status General Council of the United Nations Economic and Social Council.
She is the patron of the Cambodia Landmine Museum, Cambodian Self Help Demining (both founded by Aki Ra - CNN Hero), and the Landmine Relief Fund, founded by Bill Morse.
Recently, Peace Ambassador Angelika Jarosławska Sapieha visited the Halo Trust to discuss the next steps in the international campaign against anti-personnel mines.

She is supporting the International Campaign to Ban Landmines.

For over a year, Princess Angelika and her team are working on the world's first digital currency dedicated to the project supporting peace and sustainable development - Peace Currency.

She will soon be taking part in the Oslo Special Conference for a Mine-Free World. In 2019, Angelika Jarosławska-Sapieha received the Order of St. Stanislaus, established by King Stanislaus August Poniatowski. As a social activist she received a distinction in the highest - first class.

For all these obvious reasons and to support a global humanitarian initiative, the THEOPOLIS foundation of which I am the President, now supports the actions of the Ambassador of Peace, Princess Angelika Jaroslawska Sapieha, as well as all her actions.

VII. CAMBODIA AS A SYMBOL OF PEACE!
Cambodia remains one of the most paradisiacal countries in the world. Millions of landmines are probably still on the ground. Cambodians call them "the clandestine devil". In Cambodia, mines spread throughout the country for several decades, a result of the constant struggle between the Khmer Rouge and its opposing factions. According to information from "Halo Trust": The mines laid during the Khmer Rouge eviction in 1979 and throughout the 1980s and 1990s had a devastating impact on the Cambodian people.

More than 64,000 wounded and more than 25,000 amputees have been registered since 1979. Princess Diana's involvement in the anti-mines cause implied a call for a worldwide ban on mines. In 1999, 122 countries signed the Ottawa Treaty, which prohibits the use, production, stockpiling and transfer of anti-personnel mines.
Thirty-three countries, however, have not signed the Mine Ban Treaty.