"Mine Free World" - Conference in Oslo 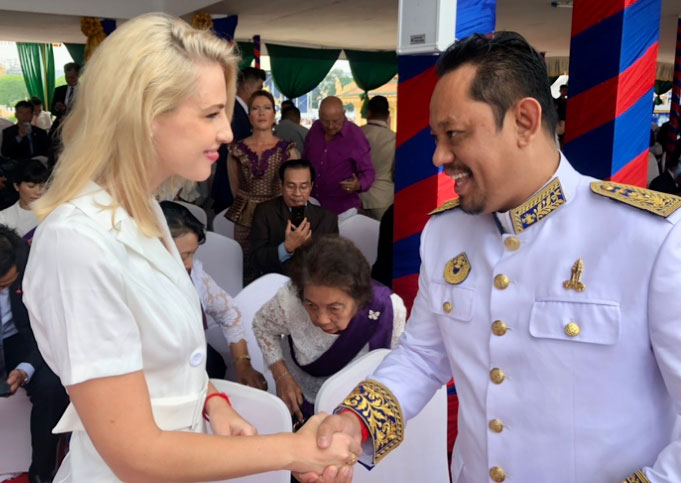 The eyes of the whole world are turned towards Oslo, wherein the coming days will begin the conference “Mine Free World” to commemorates 20 years of Anti-Personnel Mine Ban Convention.

The Anti-Personnel Mine Ban Convention, which is celebrating its twentieth anniversary, has delivered huge humanitarian impact, but there is still a huge work to be done, especially in Cambodia.

Landmines affect everyone, with 71 percent of casualties being civilians. Civilian casualties remain extremely high. This is one of the major findings of the Landmine Monitor 2019 report of the International Campaign to Ban Landmines (ICBL) that was released this week.

In 2018, 6,897 people were victims of mines and explosive remnants of war (ERW), according to the Landmine Monitor 2019external link.

Cambodia is one of the most heavily mined countries in the world. In Cambodia, over 64,000 casualties and more than 25,000 amputees have been recorded since 1979.

Peace Ambassador Princess Angelika Jarosławska Sapieha, who appeals to the world for help to clear Cambodia from landmines, met with His Majesty King Norodom Sihamoni, the King of Cambodia and the highest representatives of the Cambodian government.

His Majesty King Norodom Sihamoni, the King of Cambodia expressed his gratitude for the international support for the anti-landmine campaign in Cambodia. She was called a “Queen of Peace”.

Princess Angelika, who is representing a young generation of social activists, appeals to the world for support of the actions of Cambodian hero, Aki Ra, who in her opinion – should receive a Peace Nobel Prize for his sacrifice and many years of work to clear Cambodia from landmines and help landmines victims.

He has personally removed and destroyed as many as 50,000 landmines.

Peace Ambassador Angelika Jarosławska Sapieha is a patron of the Cambodia Landmine Museum and Cambodian Self Help Demining. She is also a partner of the Landmine Relief Fund. 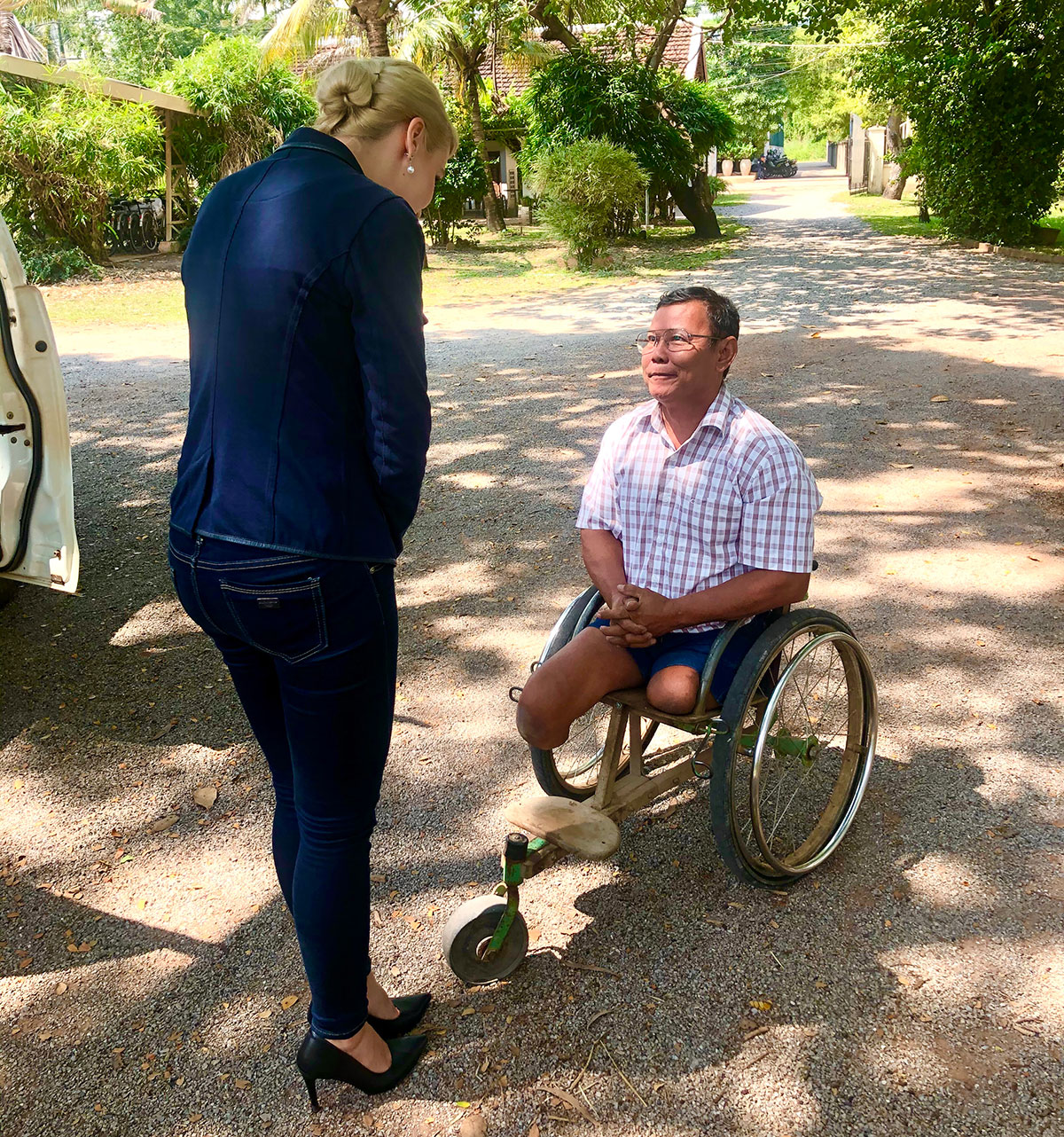 Aki Ra was chosen as a CNN Top 10 Hero out of 10 000 Nominees, but he is a very humble man. He doesn’t want to talk about himself. All that he did and is doing is dedicated to Cambodia and Cambodian people.

He says shortly: "I want to make my country safe for my people".

That is why he created a special place, which today is helping to clear Cambodia from landmines. Millions of the country’s landmines have now been cleared, but there is still a lot of work to be done. It s estimated Cambodia will not be entirely free of landmines for several decades to come.

Read the incredible history of Aki Ra and help Cambodia to be landmine free.
Aki Ra is an internationally recognized figure who has dedicated his life to making Cambodia, his native land, safe from the ravages of landmines. Born in 1970, and taken from his family by the Khmer Rouge at the age of 5, he fought for the many different armies that ravaged Cambodia for nearly 35 years. In the early 1990’s he went to work for the United Nations clearing landmines around Angkor Wat. He decided that demining would become his trade and returned to the villages where he had fought, removing landmines that were killing and maiming his fellow Khmers. His Cambodian Landmine Museum and Relief Center, established in 2007, cares for dozens of children at risk. They are housed, cared for, and educated. Today he runs a demining NGO called Cambodian Self Help Demining. Along with the other demining NGOs in the country, he is making his country safe for his people. As of 2018, his team has cleared over 155 minefields in small villages and put over 36,000 people back on land that was, in every sense of the word, killing them. In 2010, a movie, A Perfect Soldier, was made about his life. In 2012, he was a recipient of the Manhae Prize, by the Manhae Foundation in Korea. Today his two NGOs, The Cambodian Landmine Museum and Cambodian Self Help Demining, are recognized around the world as examples of what one person can accomplish, regardless of the circumstances of their birth.
Watch the video from the CNN Gala with Aki Ra: https://youtu.be/oNGzVVRSHV0

"The Cambodia Landmine Museum and Relief Center serves to educate the public on the dangers of landmines, and in addition it supports education for Cambodian youth. This home was created so that it might serve as a place of healing for bodies, hearts and minds. We believe that love, support and education are the essential means to secure a better future for the children that live here and our visitors."

The Cambodia Landmine Museum and Relief Center serves to educate the public on the dangers of landmines, and in addition it supports education for Cambodian youth. This home was created so that it might serve as a place of healing for bodies, hearts and minds.

The idea for a Landmine Museum and Relief Facility came from Aki Ra, an ex-child soldier. After years of fighting, he returned to the villages in which he had planted thousands of mines as a soldier and began removing them, by hand, and defusing them with homemade tools. In his home, he displayed some of the items he had made safe and charged the tourists $1 to view them. He used the money to support the children in his care. This first makeshift museum opened in 1997.

In the villages where Aki Ra cleared mines, he found many children wounded by landmines, orphaned or abandoned by their families. He brought them home where he and his wife Hourt cared for them alongside their own children.

The Landmine Relief Fund (LMRF) is a U.S. based 501c3 charity that supports the work of Cambodian NGOs. It was established by Bill Morse in 2003 to support the mine-clearing work

Cambodian Self-Help Demining (CSHD), a Cambodian NGO founded by ex-child soldier and The Landmine Relief Fund raises money for CSHD’s landmine-clearing work. Additionally, we support Aki Ra’s other projects, such as the school at the Cambodia Landmine Museum in Siem Reap, which offers English lessons to local children, and the Rural School Village Program (RSVP), which builds schools in rural villages where CSHD has cleared minefields or where there is no access to education.

The LMRF supports work in Cambodia to make it better, safer, and self-sufficient. There is nothing in Cambodia that cannot be done by Cambodians. All the work LMRF does is in conjunction with Cambodian charities and Cambodian NGOs.

The Relief Facility housed over twenty children from small villages in Cambodia. The children were enrolled in public government school to continue their education. The Facility also has its own school building to enrich the children’s education with a computer lab, a library, English language classes, a playground, and a staff of 14. Originally, all of the children at the facility were landmine victims. The last landmine victim left the facility in 2013 when he finished high school. The rest of the children left the museum in 2018 to live in the main town.
In 2008, with the help of the Landmine Relief Fund, a US charity, Aki Ra established a formal demining NGO, Cambodian Self Help Demining (CSHD). CSHD is a separate NGO and apart from the Museum. They clear landmines throughout the country.

CSHD is run by and for Cambodians. CSHD understands their needs and have a full grasp on what is important. Once minefields are cleared, an added benefit of safety is that civilians can now use the land to build on or to farm. CSHD clears using manual clearance, compared to many other organizations who clear minefields using large machines with more advanced technology. Manual clearance is a little slower, but is better for the environment than the machines because they can harm the land and soil. In the long term, manual clearance is more beneficial because keeping the land arable enables Cambodia to continue to grow and develop which is the adjoining goal to mine clearance.

Be a part of important mission.